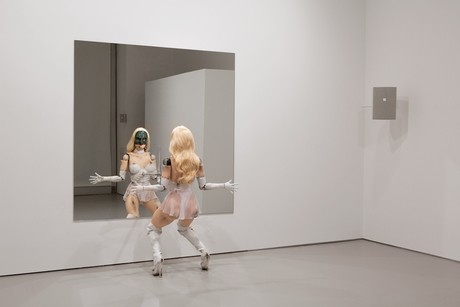 Over the past decade, Jordan Wolfson has become known for his thought-provoking works in a wide range of media, including video, sculpture, installation, photography, and performance. He pulls intuitively from the world of advertising, the Internet, and the technology industries to produce ambitious and enigmatic narratives. However, instead of simply appropriating found material, the artist creates his own unique content, which frequently revolves around a series of invented, animated characters.

Wolfson was born in 1980 in New York. In 2003, he received his B.F.A. in sculpture from the Rhode Island School of Design. In 2013, the artist joined David Zwirner. His first solo exhibition was presented at the gallery in New York from March 6 to April 19, 2014.

The artist recently participated in 14 Rooms, which was curated by Klaus Biesenbach and Hans Ulrich Obrist and presented during Art Basel in June 2014. The exhibition was a collaboration between Fondation Beyeler, Art Basel, and Theater Basel.

Earlier this year, a selection of Wolfson's video work was shown at the McLellan Galleries in Glasgow as part of the 6th Glasgow International. In 2013, Jordan Wolfson: Ecce Homo/le Poseur marked the most comprehensive survey of his work to date, organized by the Stedelijk Museum voor Actuele Kunst (S.M.A.K.) in Ghent. Also in 2013 was his first solo exhibition in the United Kingdom presented at the Chisenhale Gallery in London. Other institutions which have previously hosted solo shows include the Kunsthalle Wien, Vienna; REDCAT, Los Angeles (both 2012); Kunstsammlung Nordrhein-Westfalen, Düsseldorf (2011); CCA Wattis Institute for Contemporary Arts, San Francisco (2009); Swiss Institute of Contemporary Art, New York (2008); Galleria d'Arte Moderna e Contemporanea di Bergamo, Italy (2007); and the Kunsthalle Zürich (2004).

In 2009, he received the prestigious Cartier Award from the Frieze Foundation, which helps an artist from outside the United Kingdom realize a major project at Frieze Art Fair in London.