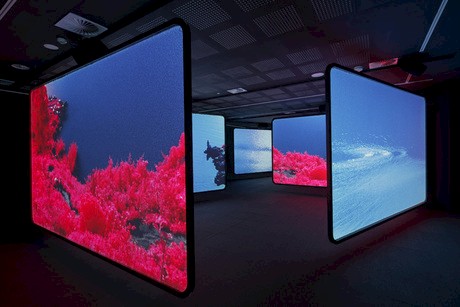 In his presentation Richard Mosse will go through his forty minute video installation, The Enclave, scene by scene, discussing context, background, and intent.

The Enclave is the culmination of Mosse’s four year project working in eastern Democratic Republic of Congo. The Enclave comprises six monumental double-sided screens installed in a large darkened chamber creating a physically immersive experience. This disorienting and kaleidoscopic installation is intended to formally parallel eastern Congo’s multifaceted conflict, confounding expectations and forcing the viewer to interact spatially from an array of differing viewpoints. Its haunting, visceral soundscape is layered spatially by twelve-point surround sound, composed by Ben Frost from recordings gathered in North and South Kivu. It is a looping, non-linear narrative which documents civilians fleeing massacre, Mai Mai militia preparing for battle, as well as M23 rebels moving on, fighting for, and finally taking the city of Goma. This humanitarian disaster unfolds in a landscape of extraordinary beauty, on the shores of Lake Kivu, which Mosse records using a discontinued military film technology originally designed in WWII to reveal camouflaged enemy installations. This film registers an invisible spectrum of infrared light, rendering the green landscape in vivid hues of lavender, crimson, and pink. Mosse employed this film to document a humanitarian disaster in which 5.4 million people have died since 1998, yet which is largely overlooked by the mass media. Frequent massacres, human rights violations, and widespread sexual violence remain unaccounted for. In a kind of advocacy of seeing, Mosse attempts to cast this forgotten tragedy in a new spectrum of light.

Mosse was born in 1980 in Ireland. He earned an MFA in Photography from Yale School of Art in 2008 and a PG Dip from Goldsmiths in 2005. Mosse represented Ireland at the 2013 Venice Biennale with The Enclave, for which he won the Deutsche Börse Photography Prize. Pulitzer Center on Crisis Reporting co-published his first monograph, Infra. His second monograph, The Enclave, was published by Aperture Foundation. Mosse is a recipient of Yale’s Poynter Fellowship in Journalism (2014), the B3 Award at the Frankfurt Biennale (2013), an ECAS Commission (2013), the Guggenheim Fellowship (2011), and a Leonore Annenberg Fellowship (2008-2010). Foreign Policy Magazine listed Mosse as a Leading Global Thinker of 2013.