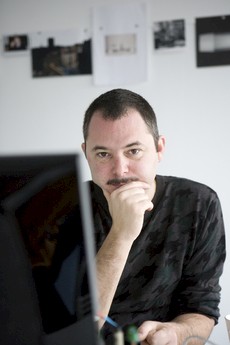 Gabriel Lester’s lecture titled Body Language addresses the notion of language articulated through performance, sculpture and architecture. As a subdivision of the broader concept of Nonverbal Communication, the proposition is that: ”if a work of art has a body, it consequently must have a language, too”.

In his lecture, Lester will focus on such a notion of body language, through his body of work. A representation of a broad spectrum of his artworks, actions and inventions will illustrate and entertain, as well as provoking ideas about how to read, how to act and how to relate.

Lester’s artwork, films and installations originate from a desire to tell stories and construct environments that support these stories or propose their own narrative interpretation. In early years this led to writing prose and composing electronic music. Later, after studying cinema and eventually fine arts, his artworks became what could be typified as cinematographic, without necessarily employing film or video. Like cinema, Lester’s practice has come to embrace all imaginable media and occupy both time and space. The artworks propose a tension span and are either implicitly narrative, explicitly visual or both at once. These works seldom convey any explicit message or singular idea, but rather propose ways to relate to the world, how it is presented and what mechanisms and components constitute our perception and understanding of it. By dissecting, editing, cutting up, repositioning and forcing perspective, Lester aspires to captivate and engage. Ultimately his artworks suggest both rational consciousness as well as associative magic thought.

Gabriel Lester was born in Amsterdam (1972) where he currently lives and works. His artworks consist of installations, performances, film and video. Other activities include commissioned artworks for public space, film directing, teaching, writing, and sound and video editing.