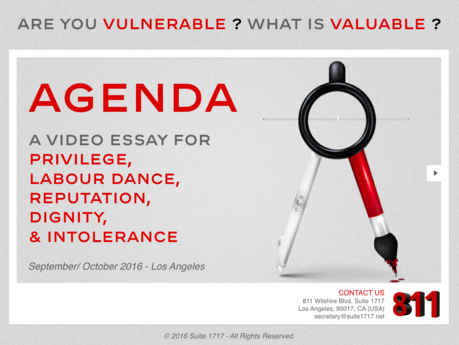 In AGENDA Ulman uses poetic language to narrate self experimentation with female hormones and the effects of excess estrogen in a body trapped between the carpeted floors and ceiling tiles of her DTLA office - a tight structure of vertical structures, linearity and clocks. This dreamlike storyline later develops into a series of cons and scams, economies of appearances and the rise and fall of Bob The Pigeon, an ode to a working class hero which finishes with pessimistic spiritual notes that the author recognizes as selfish, recognizing the entitlement of her nihilism, escapism and ability to complain to carry its own privilege—a position of criticality not accessible to all.

Amalia Ulman is an airport-based artist with an office in Downtown LA. Born in Argentina and raised in Spain, she studied Fine Arts at Central Saint Martins in London. Her works are primarily voiced in the first person, often blurring the distinction between the artist and object of study. Ulman explores the relationship between consumerism and identity, class imitation and social deception, altruism and empathy.