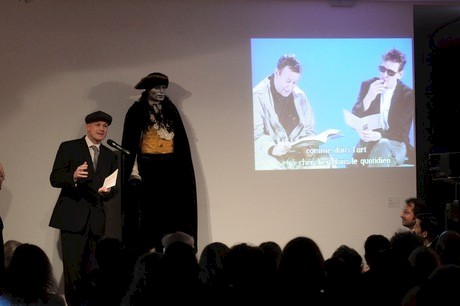 Dora García: Where do characters go when the story is over? On books and performance: Charles Filch, William Holden and Army of Love.

Although unable to find the exact quote now, I remember as a young artist being impressed on the following statement by William S. Burroughs: "Contemporary art is so much ahead of literature. We are still stuck on dialogue and character. But if we could follow the path of contemporary art, then novels would happen in real life". I decided to stick to that idea, and since the year 2000 I have made performances that are short stories, Lehrstücke, psychological and science fiction novels. There are characters appearing, disappearing and reappearing through them, thickening of plots, metamorphoses, and new and unexpected characters and plot turns. Sometimes it seems like a HBO TV series.

Dora García (born in Valladolid, Spain, 1965) lives and works in Barcelona and Oslo. She currently teaches at the Oslo National Academy of the Arts, Norway, and HEAD, Geneva. She is Co-Director for Les Laboratoires d’Aubervilliers, Paris. Her work is largely performative and deals with issues related to community and individuality in contemporary society, exploring the political potential of marginal positions and paying homage to eccentric characters and anti-heroes. She has exhibited her work at numerous international events such as the 54th, 55th and 56th Venice Biennale (2011, 2013 and 2015), documenta 12, the 29th São Paulo Biennale (2010), the 16th Sydney Biennale (2008) and Münster Sculpture Projects (2007).