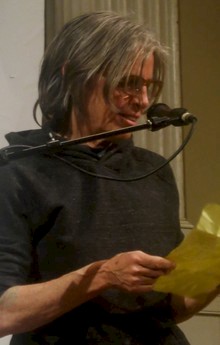 Eileen Myles is increasingly a famous television poet, her upcoming book is Afterglow (a memoir) which is a fantastic hagiography of her late pitbull, Rosie. Also she has most recently written about the work of Shannon Ebner & will perhaps read a speck from that.

Eileen Myles is the author of nineteen books including I Must Be Living Twice: New & Selected Poems, and a reissue of Chelsea Girls, both out in fall 2015, from Ecco/Harper Collins. Myles is having a bang up year in response to their new publications, being profiled in every major American newspaper and outlet, four times alone in the New York Times. They are the recipient of many grants and awards including a Guggenheim Fellowship in non-fiction, an Andy Warhol/Creative Capital art writers' grant, a Creative Capital new forms nonfiction prize, four Lambda Book Awards, the Shelley Prize from The Poetry Society of America; their Inferno was named to the Slate/Whiting novel list and in 2015 they received the Clark Prize for excellence in art writing. They live in Marfa TX and New York.