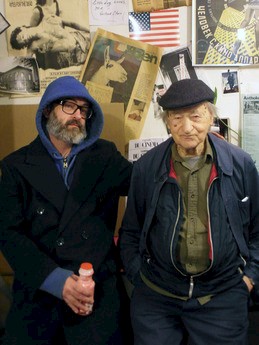 Jonas Mekas in conversation with the artist Douglas Gordon who takes Mekas' Diaries "I Had Nowhere to Go" as the starting point for a new work.

Jonas Mekas (*1922) is a legendary filmmaker, author, poet and co-founder of the Anthology Film Archives in New York. Mekas was born in Lithuania, he came to Brooklyn via Germany in 1949 and began shooting his first films there. Mekas developed a form of film diary in which he recorded moments of his daily life. He became the barometer of the New York art scene and a pioneer of American avant-garde cinema. Every week, starting in 1958, he published his legendary “Movie Journal” column in The Village Voice, writing on a range of subjects that were by no means restricted to the world of film. He conducted numerous interviews with artists like Andy Warhol, Susan Sontag, John Lennon & Yoko Ono, Erick Hawkins, and Nam June Paik.

Douglas Gordon’s practice encompasses video and film, installation, sculpture, photography, and text. Through his work, Gordon investigates human conditions like memory and the passage of time, as well as universal dualities such as life and death, good and evil, right and wrong.

Born in Scotland, Gordon lives and works in Berlin and Glasgow and teaches film at the Städelschule in Frankfurt am Main. He is represented internationally by Gagosian Gallery, as well as Until then in Paris, Galerie Eva Presenhuber in Zürich, and Dvir Gallery in Tel Aviv.

Conversation with Jonas Mekas, Anne King (Spector Books) and Natascha Gikas (Deutsches Filmmuseum) to "Scrapbook of the Sixties" and screening of film clips from "Life of a Happy Man", 2012.

Spector Books collected published and unpublished texts by Jonas Mekas in "Scrapbook of the Sixties”. Mekas’ writings reveal him as a thoughtful diarist and an unparalleled chronicler of the times—a practice that he has continued now for over fifty years.