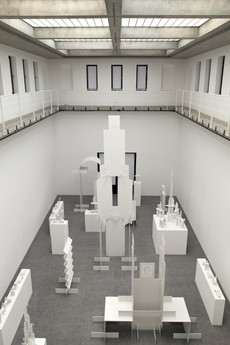 Accompanying their exhibition „White Suprematism“ at Portikus (until until 20. November 2016) the artists are in conversation with Fabian Schöneich to talk about their work, their past, and their inspiration, while also showing some videos.

In more than 25 years of collaboration, Jos de Gruyter & Harald Thys have created a diverse body of work. For their exhibition at Portikus they show both small- and large-scale white-coated steel sculptures.

Once again, it is the terrifying and the banal nature of the everyday that the artists take as their subject. De Gruyter & Thys take up this development that (unconsciously) affects us all and, in this way, their works become a darker and more intense representation of everyday life. Their artistic approach is characterised by the tragicomic and the uncanny, as well as claustrophobic moments and situations, which assume a central role in their video works and performances, often resurface in their sculptures and drawings, and which are also recognizable in their site-specific installations.

Jos de Gruyter (b. 1965) and Harald Thys (b. 1966) live and work in Brussels. White Suprematism was initially presented at Contemporary Art Centre (CAC) in Vilnius, April 15–May 29, 2016. The exhibition at Portikus functions as a continuation, including new works. Recent solo exhibitions include CCA Wattis Institute for Contemporary Arts in San Francisco (2015), MoMA PS1 in New York (2015), Raven Row in London (2015), Kunsthalle Wien in Vienna (2014), and M HKA in Antwerp (2013).