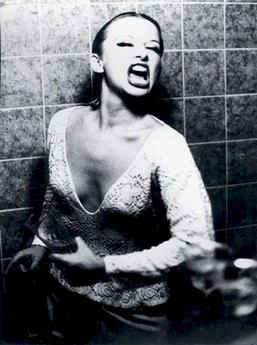 “Aller Jamais Retour” is the mantra of Tabea Blumenschein and Ulrike Ottinger’s joined film project „Bildnis einer Trinkerin“ from 1979, in which the former plays a woman who travels to Berlin to drink herself to death. And she does so beautifully, acting out her public and private carouse as a flamboyant act of antisocial behaviour, that puts to shame the stereotypical social roles of female drinking as either a bourgeois privatized tragedy or a proletarian publicly displayed disgrace. Blumenschein and Ottinger propose an antisocial female, one whose role is non-reproductive and rather destructive – not (only) for herself but more so for the social order she exempts herself from. And they are far from alone in this endeavour.

There is whole a history of such antisocial forms in modern and contemporary art, stretching from the French Symbolists, to early Salvador Dalí, to the destruction art of the 1960s and Lee Lozano’s instruction pieces and paintings, all the way to more contemporary positions such as Ian White, Michaela Eichwald, Steve Reinke or Sidsel Meineche Hansen.
In “Aller Jamais Retour” I want to argue that specifically within a present tense that is marked by the de-socialization of modern forms of life, the idea of an antisocial art becomes of more and more interest. The history of an art that does not so much aim at mending the contemporary brutalisms, but rather reflects them back, formalizes and materializes them and fills them with divergent desires and affects. In this talk I want to look at a couple of examples of such an antisocial art to test out their relations and align their possibly shared forces.

Kerstin Stakemeier is a Berlin-based educator and writer. She works as a professor of Art Theory and Mediation at the Academy of Arts Nuremberg and contributes to Artforum and Texte zur Kunst a.o.. In 2016 „Reproducing Autonomy" (co-authored with Marina Vishmidt) came out, in 2017 „Entgrenzter Formalismus“ (Debordered Formalism) will be published, and the long-term exhibition and magazine project „Klassensprachen / Class Languages“ (with Manuela Ammer, Eva Birkenstock, Jenny Nachtigall, Stephanie Weber) will start with two group shows in Berlin and Düsseldorf and two magazine issues.