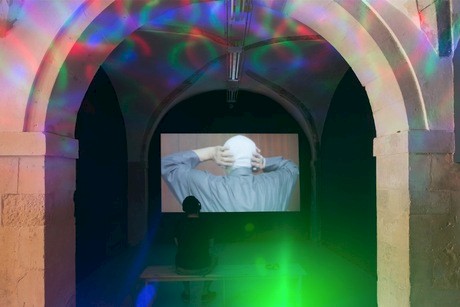 Since 2010 Lawrence Abu Hamdan’s Aural Contract has been dedicated to understanding the role of voice in law and the changing nature of testimony in the face of new regimes of border control, algorithmic technologies, medical sciences, and modes of surveillance. These projects have taken the form of audiovisual installations, performances, graphic works, photography, Islamic sermons, cassette tape compositions, texts, forensic audio analysis, advocacy, expert testimony and, most recently, potato chip packets.  In this talk he will present a body of work that attempts to define a politics of listening, that moves away from classic notions of advocacy and of giving people a voice. A politics of listening that does not simply seek to amplify voices but attempt to redefine what constitutes speech itself.

Lawrence Abu Hamdan is a visual artist and private ear with a background in DIY music. He has had solo exhibtions at Kunsthalle St Gallen, Beirut in Cairo, Casco Utrecht and The Showroom, London. Abu Hamdan was the Armory Show commissioned Artist of 2015 and has exhibited and performed at venues such as The New Museum, Van AbbeMuseum, The Shanghai Biennial (2014), The Whitechapel Gallery, MACBA, Tate Modern, M HKA and The Taipei Biennial (2012).  In 2013 Abu Hamdan’s audio documentary The Freedom of Speech Itself was submitted as evidence at the UK asylum tribunal where the artist himself was called to testify as an expert witness. He continues to make sonic analyses for legal investigations and advocacy - most recently his audio analysis was prominently part the No More Forgotten Lives campaign for Defence for Children International. His writing can be found in Forensis Sternberg press, Manifesta Journal and Cabinet Magazine.