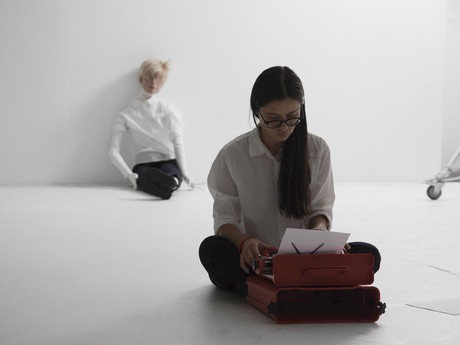 Mai-Thu Perret is an artist who lives in Geneva, Switzerland. She is known for her multi-disciplinary practice encompassing sculpture, painting, video and installation. Perret has created a complex oeuvre which combines radical feminist politics with literary texts, homemade crafts and 20th century avant-garde aesthetics. She was born in Geneva and studied at Cambridge University and the Whitney Independent Study Program, New York. She has been awarded for both the 2011 Zurich Art Prize and le Prix Culturel Manor (2011) and took part in ILLUMInations (curated by Bice Curiger) at the 54th Venice Biennale. In 2016, Mai-Thu Perret will be the subject of a solo exhibition at the Nasher Sculpture Center, Dallas. Curating has played an important role in her practice since its inception. Among other shows she has organized Voids: A Retrospective (Centre Pompidou, Paris and Kunsthalle Bern, with John Armleder, Mathieu Copeland, Gustav Metzger and Clive Philpot).

The lecture will focus on the interplay between narrative and materiality in her work, from early experiments with a story called The Crystal Frontier to her engagement with wider historical narratives about art and politics in video installations such as An Evening of the Book. She especially wants to discuss the recent performance piece Figures, which is a collaboration between herself and dancer Anja Schmidt, musician Beatrice Dillon and singer-songwriter Tamara Barnett-Herrin.