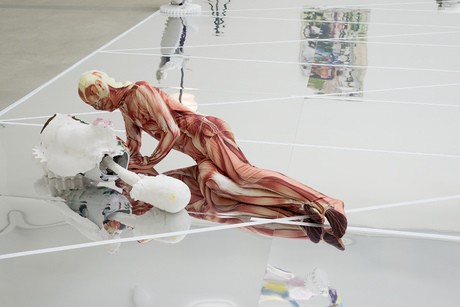 Stephan Dillemuth talks about his recent work in relationship to bohemian research in the age of Corporate Rokoko. Corporate Rokoko is a concept that was coined in the last years of the 20th century by Werner von Delmont to describe an aesthetic representation program that induced hallucination into dominating and powerful corporations.

Stephan Dillemuth studied at the art academies in Nuremberg, Düsseldorf, and Munich. He currently teaches at the Akademie der Bildenden Künste in Munich. From 1990 to 1994, Dillemuth together with Josef Strau, Nils Norman, Merlin Carpenter, and Kiron Khosla operated the space Friesenwall 120 in Cologne, then together with Hans-Christian Dany, UTV (Unser Fernsehsender / Our Television Channel. In 1995, there was the Summer Academy at the Kunstverein in Munich and the publications AKADEMIE and The Academy and the Corporate Public. Starting in 1997, his collaboration with Werner von Delmont resulted in various performances and the publication Corporate Rokoko. Since 2000 Dillemuth has had solo projects at venues such as Galerie Nagel Draxler (Cologne/Berlin), American Fine Art (New York), Galerie für Landschaftskunst (Hamburg), Reena Spaulings (New York), Galerie Éric Hussenot (Paris), Secession (Vienna), Konsthall C (Stockholm), Transmission Gallery (Glasgow), and Uma Certa Falta de Coerência (Porto).