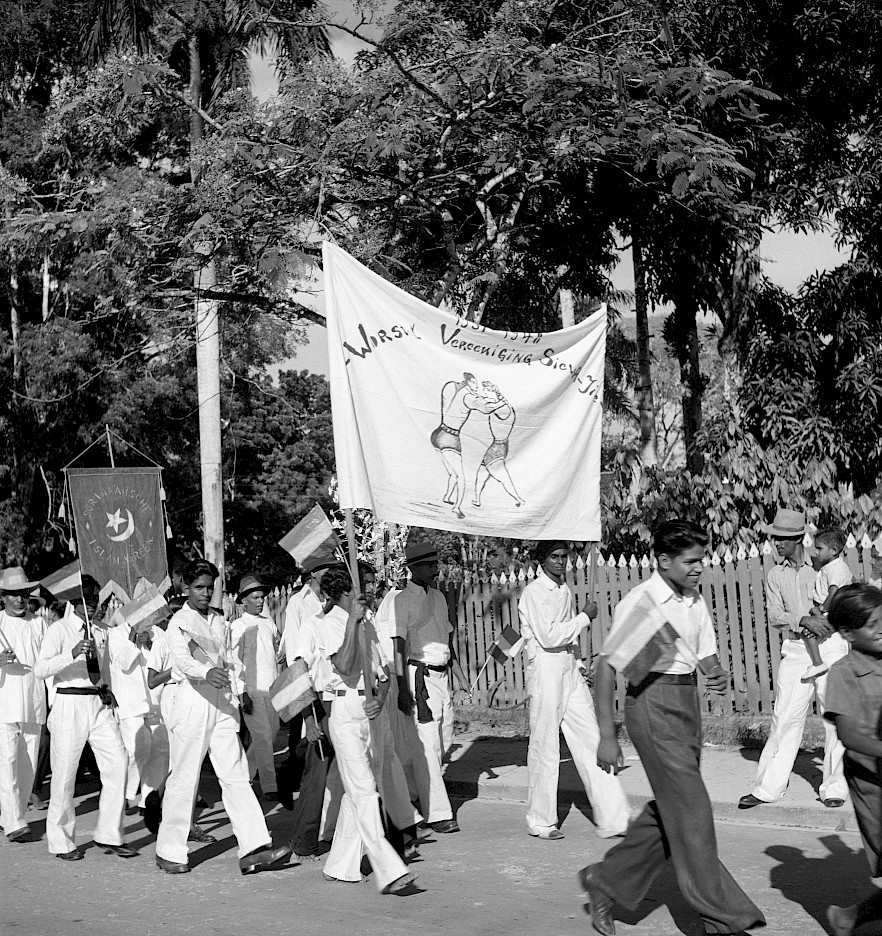 Photographer, ethnologist, and babalawo Pierre Fátúmbí Verger (1902, Paris–1996, Salvador de Bahia) studied the relationships between cultures of the African diaspora and those of West Africa. In 1948, during an eight-day trip through Suriname, Verger made 257 photographs that today are kept in the Pierre Verger Foundation in Salvador da Bahia. How do these photographs relate both to the greater archive of images made in Suriname and also to Pierre Verger’s life’s work? And what does it mean for these images to be shown and seen in the context of contemporary art?

The exhibition Pierre Verger in Suriname by Willem de Rooij will be on view at Portikus, featuring a new installation in which de Rooij connects spectators and Verger’s images by means of a viewing device. A catalogue designed by Ronnie Fueglister with essays by Karin Amatmoekrim, Ayrson Heraclito, Philippe Pirotte, Willem de Rooij, Richard Price, and Gloria Wekker makes the complete suite of images accessible to a larger public for the first time.

Angela Lühning is the honorary director of the Pierre Verger Foundation where she has worked since its founding in 1988. In this capacity, she is committed to researching Pierre Fátúmbí Verger, helping interested researchers, and taking care of the archive. Furthermore, she develops courses for children and youth from the neighborhoods surrounding the archive, so they can experience and learn about different means of expression in Afro-Brazilian culture. Professionally, Lühning has been working as a musical ethnologist at the School of Music of the Federal University of Bahia (UFBA) since 1990, where she studies the musical diversity of Brazilian culture.

Carl Haarnack studied Political Science at the University of Amsterdam. He is the founder of Buku - Bibliotheca Surinamica, a bibliophile collection of antique books about Suriname. He writes for the magazine Parbode and the website www.buku.nl. He also publishes articles on the history of Suriname and colonial heritage. Haarnack is coauthor of Black is Beautiful, Rubens to Dumas (2008). He worked as a curator on the exhibition Slavery Depicted at the Special Collections of the University of Amsterdam in 2013. In 2019/2020 Haarnack was an advisor to the Grote Suriname exhibition in the Nieuwe Kerk in Amsterdam. In 2017 he published “Nachrichten von Surinam: Representations of a Dutch Colony in German Travel Literature”, in Travel Writing in Dutch and German, Routledge, 2017.

Oliver Hardt is a director and filmmaker based in Frankfurt am Main. In his documentaries, he frequently addresses the cultural dynamics of the African Diaspora with a strong emphasis on architecture, design and contemporary art. His filmography includes Black Deutschland, a cinematic exploration of Black life in Germany; The United States of Hoodoo, a road trip to the spiritual sources of African-American music and visual culture; David Adjaye – Collaborations, a portrait of the Ghanaian-British architect through the eyes of his friends, mentors, and collaborators; and most recently The Black Museum, a feature documentary about the new National Museum of African American History and Culture in Washington D.C.