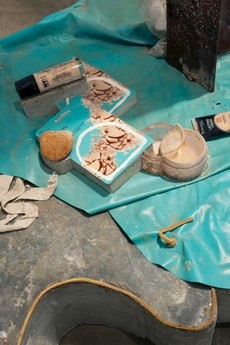 Corin Hewitt will speak on his work both as an artist and as an educator. Hewitt’s materially rigorous work employs cycles of photography, video, performance, and sculpture in an investigation of image and object making systems. Hewitt will discuss the evolution of his work and thoughts. He will also discuss a series of projects he has done with students using color as a narrative structure to develop large both films and large scale performance works.

Hewitt has exhibited widely including solo exhibitions at the Whitney Museum of American Art, Museum of Contemporary Art in Cleveland, and the Seattle Art Museum. His work has recently been recently included in group exhibitions at the Astrup Fearnley Museum of Modern Art, Oslo; the Sao Paolo Biennial in Brazil, ; the Whitney Museum, the Henry Art Gallery, Seattle; Galerie Perrotin, Paris, with the Public Art Fund in New York, and the Wanas Foundation in Sweden.Hewitt is a recipient of the 2014/15 Rome Prize, a 2011/12 Guggenheim Fellowship, and a Joan Mitchell Foundation Grant in 2010/11. Mousse Publishing has just released a monograph on Hewitt’s work entiitled 7 Perfomances. Hewitt is represented by Laurel Gitlen Gallery in New York and Hewitt is an Associate Professor of Sculpture and Extended Media at Virginia Commonwealth University.