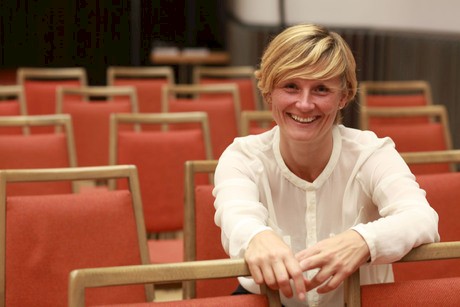 Ellen Blumenstein: Why Curating Thematically: Fire and Forget, an Exhibition Project at KW

"Fire and forget" comes from military jargon, and is a term for weapons systems that are no longer used in direct combat with an enemy but are launched from a safe distance. The exhibition Fire and Forget takes the military expression as the starting point for an examination of the conventional ideas about war and armed force. The project revolves around the new dimensions of violence that go with the new technologies, and the new strategies required by this central challenge to our future coexistence. The exhibition is oriented towards the most visible agent of violence: weapons. Fire and Forget applies the means of art to address the long-term effects of these new weapons on the human psyche. The exhibition looks at the political aporia this new detachment between physical violence and imminent threat involves and at the meaning that history, recollection and forgetting may have for the outbreak or avoidance of violence under these new conditions.

Ellen Blumenstein *1976 in Witzenhausen, Germany lives and works in Berlin. Blumenstein has been chief curator of KW Institute for contemporary art, Berlin since January 2013. In her first year, she realized the exhibitions "Relaunch", "Kader Attia: Repair. 5 Acts" and "Real Emotions: Thinking in Film", as well as launching comprehensive public programs and professional partnerships. In her second year she premiered the first solo exhibitions in Germany of artists Ryan Trecartin, Kate Cooper, Channa Horwitz and Elin Hansdottir. Before KW, she was an independent curator, member of the curatorial collective THE OFFICE and founder of the project space Salon Populaire. Between 1998-2005 she worked as a curator for KW Institute for Contemporary Art, where she realized the exhibition project "Regarding Terror: The RAF-Exhibition" (with Klaus Biesenbach, Felix Ensslin, 2005). Since, she curated the exhibition "Between Two Deaths" at ZKM in Karlsruhe (with Felix Ensslin, 2007), and in 2011 she curated the Icelandic Pavilion at the Venice Biennial (Libia Castro and "lafur "lafsson).