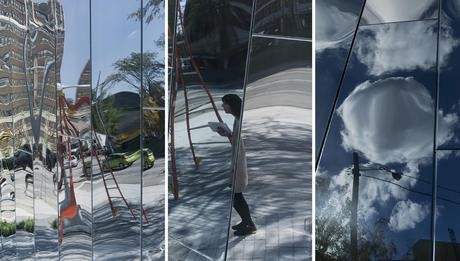 The Rektor of Städelschule, Professor Philippe Pirotte, and the Städelschule Architecture Class are proud to announce this year’s Dean’s Honorary Lecturer: Farshid Moussavi.

Farshid Moussavi RA is an architect, principal of Farshid Moussavi Architecture (FMA) and Professor in Practice of Architecture at Harvard University Graduate School of Design. At FMA, Moussavi has completed her first USA commission, the Museum of Contemporary Art in Cleveland, the flagship store for Victoria Beckham in London, and an installation at the 13th Architecture Biennale in Venice (2012). Moussavi is currently working on a wide range of prestigious projects including a residential complex in the La Défense district of Paris (under construction), a residential complex in Montpellier, as well as an office complex in the City of London.

Moussavi was previously co-founder of the London-based Foreign Office Architects (FOA), where she co-authored many award-winning projects including the Yokohama International Cruise Terminal and the Spanish Pavilion at the Aichi International Expo in Japan. FOA was also part of the team that designed the Olympic Park and its legacy vision for the Lee Valley as part of the London bid to the International Design Committee.

Educated at Harvard’s Graduate School of Design, University College London and Dundee University, Moussavi has taught and served as External Examiner in academic institutions worldwide. She was a member of the Steering Committee of the Aga Khan Award for Architecture between 2004 and 2015 and has been a trustee of the London Architecture Foundation and the Whitechapel Gallery in London since 2009. She was elected a Royal Academician in 2015 and has published three books, The Function of Ornament, The Function of Forms, and the Function of Style, based on her research and teaching at Harvard.

The Dean’s Honorary Lecture was introduced in 2006 as a celebration of architecture at the Städelschule Architecture Class’ annual end of year review of student work. The series seeks to honour a person whose contribution to the architectural discipline has been seminal in professional, academic and/or institutional terms. Since its introduction, the annual lecture has been given by: Mark Wigley (2006), Mohsen Mostafavi (2007), Greg Lynn (2008), Brett Steele (2009), Jeffrey Kipnis (2010), Sanford Kwinter (2011), Alejandro Zaera-Polo (2012), Beatriz Colomina (2013), Elizabeth Diller (2014), Benedetta Tagliabue (2015), and Bernard Tschumi (2016).

This year, the Dean’s Honorary Lecture is part of the celebration of the Städelschule’s 200-year jubilee: http://www.staedelschule.de/programm.html
Der Vortrag findet in englischer Sprache statt.

**The Dean’s Honorary Lecture by Sir Peter Cook is unfortunately cancelled. Instead, Farshid Moussavi will give this year’s honorary lecture.**