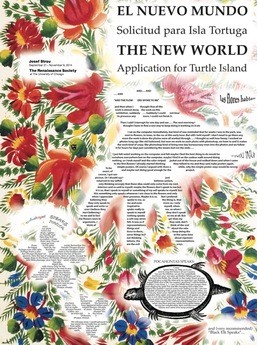 The lecture can be understood as the second part of a lecture Josef Strau did in Städelschule already in 2011. It could be seen like a lecture but more as an exercise in extemporaneous talk, thus reintroducing a model of working, that appears a dominant figure in many of his productions, like in writing, exhibiting or jewelry making, albeit always following predetermined or ready made story lines, that interweave issues of art production, history, social hierarchy, theology or of traveling. In a similar way in his exhibition and publication The New World Josef Strau recently used fragments of historic first encounter reports of Europeans with Native Americans to retell in an improvised mode of production his own story of gratitude through moments of contemporary encounters within the United States and Mexico, trying to create through these both complex or sometimes simplified narratives a seamless whole of a partly fictional fantasy of redemption in contemporary culture.

Josef Strau worked in the last years in different roles, mostly as artist and as writer, but as well as jeweler, curator and art space organizer. Recent solo exhibitions include The New World, The Application, Renaissance Society, Chicago 2014 and House of Gaga, Mexico City 2013 and Greene Naftali Gallery, New York, 2012. In 2002, Strau founded Galerie Meerrettich, an independent Berlin gallery that closed in 2006. Strau is also a writer, not only in most of his own art production but also contributing to independently produced art publications, catalogue essays and art magazines.