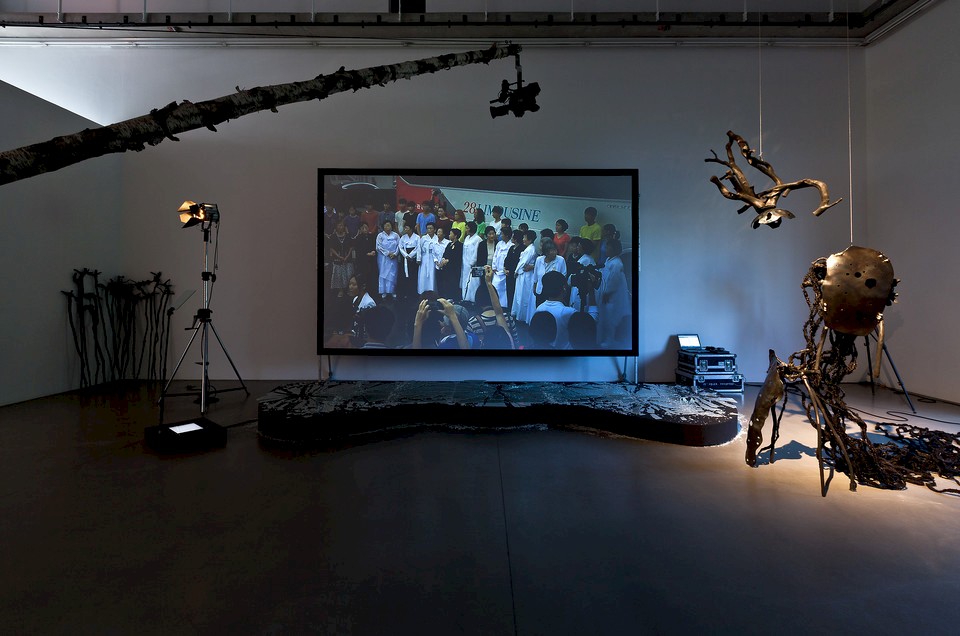 When war broke out in Korea in 1950, the South Korean government committed a series of massacres against the civilian population. Ordered by the leader of the South Korean government, Syngman Rhee, the mass murders were intended to annihilate those who were suspected of supporting the North or been accused of being traitors that had helped the Korean People’s Army. Even today, little is known about how and why these people died. Thirty years later, on May 18, 1980, people in Gwangju took to the streets to defend their country’s fledgling democracy. The newly installed military regime under Doohwan Chun slanderously portrayed the protesters as communists and commanded a massacre. Again, hundreds of people were killed and thousands wounded.

The work of South Korean artist Minouk Lim (b. 1968) explores these turning points in Korean political history: events that many prefer to forget and certainly do not wish to dwell on. Lim draws on historical and political reality to develop works including installations, sculptures, videos, and performance pieces that deal with South Korea and its capital, Seoul. The artist has devised a visual language designed to put the rapid growth and development that have remade the country’s face over the past decade on hold in order to initiate a process for which the German language has the peculiar word Vergangenheitsbewältigung: an effort to come to terms with the past.

The exhibition United Paradox is centered around Minouk Lim’s most recent work Navigation ID (2014), which addresses the abovementioned massacres and seeks to involve the victims’ surviving family members. An intervention and performance piece, Navigation ID was part of the 10th Gwangju Biennale Burning Down the House in 2014. On the day of the Biennale’s press opening, two freight containers were brought into the city from the other side of the country and set down on the Biennale square. They contained the bones of people who had died in the massacres of the 1950s; their families had painstakingly located and collected their mortal remains. The trucks carrying the containers were chaperoned by a bus with relatives and an ambulance; footage of the convoy’s “funeral march” shot from a helicopter and camera teams on the ground was broadcast live on a South Korean online news website. Portikus now presents the premiere of a video piece based on the performance. To emphasize the need for more reporting about the events after decades of virtual silence, the exhibition design is an abstract rendering of the setup of a television studio, complemented by sculptures and installation pieces.

In addressing a dark period in her own country’s past, Minouk Lim’s exhibition at Portikus reminds us that we refuse to face up to our history at our own peril. Germans know this only too well; we still struggle but have learned to examine and discuss our past publicly. Lim turns our attention to South Korea and a sensitive issue that the country’s swift rise to prosperity tends to obscure. The title succinctly expresses the contradiction at the heart of any community—a group of individuals who live together for a variety of reasons, not all voluntarily chosen, and share a past of suffering. United Paradox is an exhibition, a broadcasting studio as well as a starting point of a discussion on community building. Here, it presents a community united by an emotion of sorrow, expressed as the abstract feeling of a ‘hole in one’s chest’.

On the day of the opening, Minouk Lim will perform FireCliff 5, a new performance as part of the FireCliff series (2010-present). Presented as a ‘performance documentary theater,’ the series delves into the artist’s continuing effort in grasping the sense of orientation within a society where the unforgettable is forgotten against the will of the many. Firecliff 5, a new rendition of the series in response to the exhibition at Portikus, appropriates the exhibition as a stage of the performance.

United Paradox, Minouk Lim’s first institutional solo exhibition in Europe, is produced in collaboration with Kunsthalle Wien, Vienna, where her work will be on view in the late fall 2015 as part of the group show Political Populism.