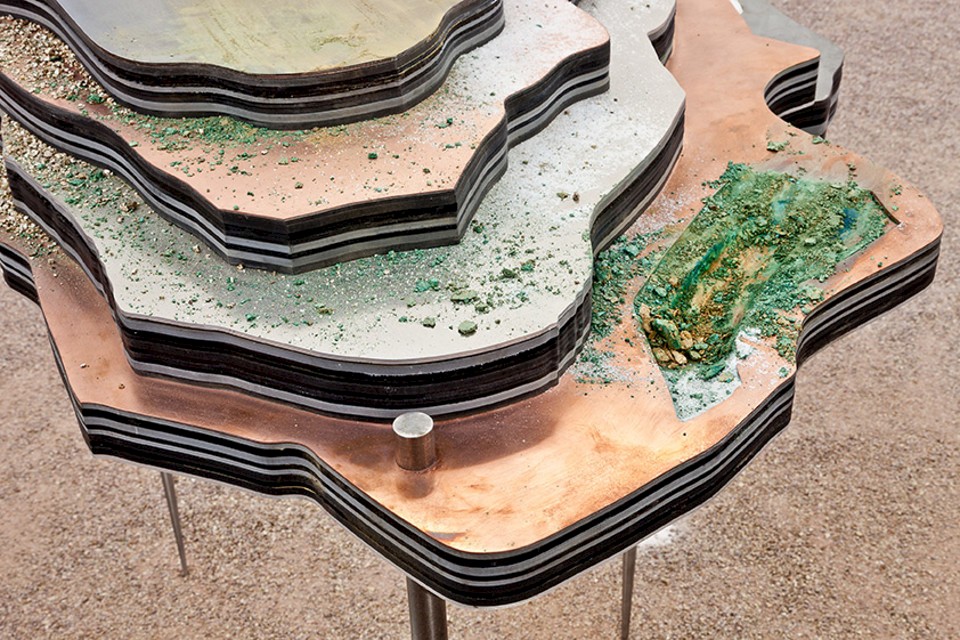 Otobong Nkanga in conversation with Clare Molloy will be a haptic introduction to Nkanga's practice. The talk will address the process behind Nkanga's forthcoming exhibition at Portikus: her long-standing examination of “bling”, a field-trip through Namibia and the intensive workshops that she has led at the Städelschule, where she is currently a guest professor.

Crumbling Through Powdery Air follows on from In Pursuit of Bling, a work realised for the 8th Berlin Biennale, and examines the complex relationships that the desire for shining substances creates. Nkanga and Molloy are also working on a second exhibition at the Kadist Art Foundation in Paris, which deals with the extensive photographic and film material that Nkanga created in Namibia.

Otobong Nkanga is a visual artist based in Antwerp, Belgium. From 2013-2014 Nkanga was an Artist in Residence of the DAAD. Recent exhibitions include: Tracing Confessions, Museum Folkwang, Essen, DE (2015), Taste of a Stone, Stedelijk Museum, Schiedam, NL (2015); Diaspore, 14 Rooms, Basel, CH (2014); Sharjah Biennial 11, Sharjah, UAE, (2013); Across the Board: Politics of Representation, Tate Modern, The Tanks, London, UK (2012).
Clare Molloy is the Kadist Curatorial Fellow of 2015, supported by the Kadist Art Foundation (Paris/San Francisco). She studied Curatorial Studies (a master’s programme at the Staatliche Hochschule für Bildende Künste – Städelschule and Goethe University Frankfurt).