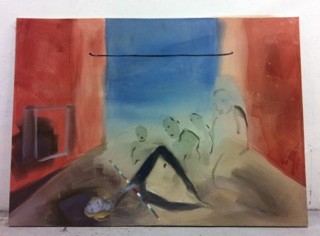 Sophie von Hellermann is known for her large scale canvases in pastel palettes, often presented in elaborate installations. The chosen title of her lecture The Drama Continues refers to the stories that her paintings tell, which often emerge out of the serial and narrative sequence of her installations. The lecture will thus be discussing possible problems of narrative figurative painting and qua examples shed light on the different ways of approaching these.

Sophie von Hellermann was born in 1975 in Munich. She received her BFA from Kunstakademie, Düsseldorf and an MFA from Royal College of Art, London. Selected solo exhibitions include: Sophie von Hellermann at Office Baroque, Brussels (2017); After a Fashion– A Play with Fire at Vilma Gold, London (2015); Novel Ways at Greene Naftali, New York (2013); Elephant in the Room at Firstsite, Colchester (2013). She lives and works in London and Margate.