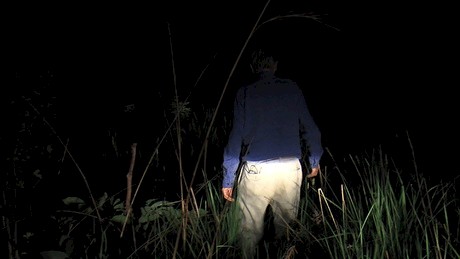 Fifty years after his assassination, Patrice Lumumba, Prime Minister of the newly independent Congo, is still haunting Belgium. Through commemorations, encounters and a return visit, a top-ranking Belgian civil servant who was in Élisabethville (from 1966: Lubumbashi) on that tragic day of 17 January 1961 attempts to exorcise the ghosts of the past. To the sound of St John Passion by J.S. Bach, Sven Augustijnens film "Spectres" plunges us into one of the darkest days of the Belgian Congo’s decolonisation. An examination of the biopolitical body, this feature-length film exposes the fine line separating legitimation and historiography and the traumatic question of responsibility and guilt.

Sven Augustijnen *1970, lives and works in Brussels. His films, publications and installations on political, historical and social themes constantly challenge the genre of the documentary, reflecting a wider interest in historiography and a predilection for the nature of storytelling: "Historiography is by no means a natural phenomenon. The way we use stories, images and fiction to construct reality and history fascinates me."

Augustijnen will screen his film "Spectres" and a discussion will follow afterwards.