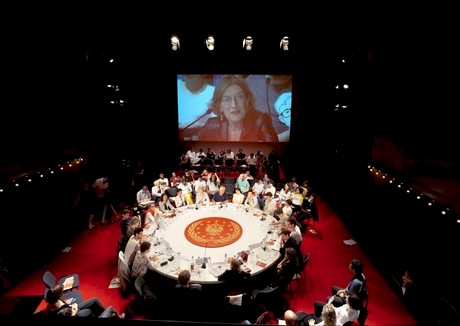 The talk will focus on political imagination as a tool to create utopian moments. Imagination interacting with political reality provides a possibility to reject conventional assumptions about the world. Bartana will show and discuss clips from several projects produced between 2007 and 2014.

Yael Bartana *1970 in Kfar-Yehezkel, Israel is a video artist who explores the imagery of cultural identity. Her early video work, both documentary and staged, explores social phenomena that illuminate the complexity of contemporary life, primarily within her native country of Israel. These early works document collective rituals, ceremonies and social diversions in which aesthetic interventions, including soundtracks, the slowing of the image and the use of specific camera perspectives, played a role. In recent years, she has more and more staged her films, and proposed utopic narratives for new chapters of history.

She studied at the Bezalel Academy of Arts and Design, Jerusalem, the School of Visual Arts, New York and the Rijksakademie in Amsterdam. Her solo exhibitions include the Moderna Museet in Malmö, the Museum of Modern Art in Warsaw, PS1 in New York, the Center for Contemporary Art in Tel Aviv, the Kunstverein in Hamburg and the Van Abbemuseum in Eindhoven. She participated in the Sao Paolo Biennial (2010 and 2006), Documenta 12 in Kassel and the Istanbul Biennial. In 2011, Yael Bartana represented Poland for the 54th edition of the Venice Biennial.