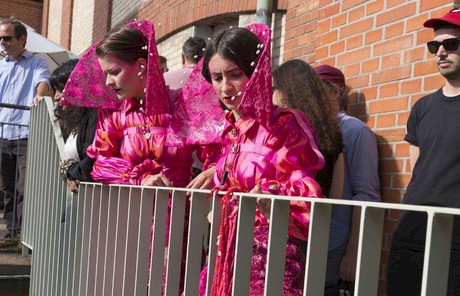 New Noveta is the collaborative project of Ellen Freed and Keira Fox, both based in London. They most recently performed as part of the performance program at Liste, Rehearsing Intra-Activity, curated by Eva Birkenstock. In February this year they had a solo show and performance 'Violent Amurg' at Ludlow38, New York, and performed and exhibited as part of the show Site Visit at Kunstverein Freiburg, Germany. Amongst other places, they performed at Serralves Foundation in Porto as part of the program O Museu Como Performance (2015), Good Forever in Düsseldorf (2016), the Annual Bipolar Performers Meeting in Sopot, Poland (2017), and at Forde in Geneva (2016).
This lecture will be an overview of their processes and projects so far, displaying and discussing works spanning New Noveta's six year collaboration.

"Emotionally intense as they are, the sense of invasiveness to New Noveta’s works in fact heightens the schism between performer and audience. But to consider the group confrontational would be to mischaracterize a project intent on reproaching attitudes that otherwise pathologize ‘difference as illness’. For Fox and Freed, these procedures of normalization and diagnosis are endemic within high-pressure society, and New Noveta seeks to confront how public displays of anxiety, both symptom and vessel of control, are often perceived negatively" Saim Demicran.