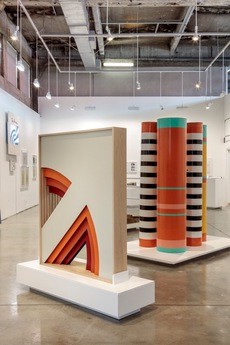 Sylvia Lavin: The Duck and the Document: True Stories of Postmodern Procedures

The Duck and the Document: True Stories of Postmodern Procedures will present an exhibition currently on view in Los Angeles that features a series of fragments, from handrails to façade panels, salvaged from canonic buildings of the late 20th century.

Typically associated with drawing and the circulation of media images, postmodern architecture is generally understood to have been largely a matter of style and surface ornament, freed from the exigencies of political and technical systems by the force of architectural autonomy. The Duck and the Document challenges this view by embedding the expected imagery of postmodernity within materials that demonstrate the dense tangle of regulations, production specifications and technologies that constrained architectural design rather than liberated it. While these True Stories of Postmodern Procedures describe a less heroic and autonomous architect, they also produce a more persuasive account of architectural ingenuity as it sought to survive the bureaucratization not merely of the architectural profession but of the very idea of architecture. Featuring artifacts from the buildings and archives of Peter Eisenman, Deborah Sussman, Charles Moore, Mike Reynolds, SITE and others.

Sylvia Lavin is a critic, historian and curator whose work explores the limits of architecture across a wide spectrum of historical periods. She is Professor, Director of PhD Programs and former Chair of the Department of Architecture and Urban Design at UCLA and has taught at Princeton, Harvard, and Columbia among other schools. She is a is a frequent contributor to journals such as Artforum, Perspecta and Log and among her books are Form Follows Libido: Architecture and Richard Neutra in a Psychoanalytic Culture, Kissing Architecture and Flash in the Pan. Recent exhibitions include Everything Loose Will Land: Art and Architecture in Los Angeles in the 1970s, The New Creativity and The Artless Drawing. She has been recognized by many grants and awards, most recently from the American Academy of Arts and Letters, the Getty Research Institute and the Graham Foundation. She is currently working on The Duck and The Document: True Stories of Postmodern Procedure, an exhibition that originated at the Princeton School of Architecture Gallery as Salvage, is currently on view at the SCI-Arc Gallery and will appear an expanded form at the Canadian Center for Architecture in 2018.