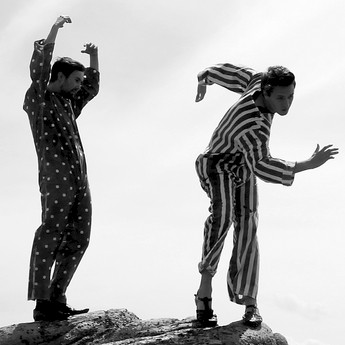 In "A conversation on Lichen Voices" Zin Taylor speaks about his audio and video works, which are on view in frame of "Nacht der Museen" at Portikus.

"Lichen Voices / Stripes and Dots" is a narrative video where lichen, a growth existing upon the surface of rocks, uses the characters of a stripe and dot to make visual the thoughts it has been thinking. This hallucinogenic proposition introduces the transference, and subsequent translation, of information from one form into another. The stripe and the dot, two analog building blocks of visual language, are seen giving form to the stories held within the ancient lichen organism.

"The Story of Stripes and Dots (Chapter 4)" is a radio-play imagining the translation of sound into form. A voice introduces a dot, and with the aid of an analog synthesizer, expands its characteristics into a series of stripes: the sign-wave of sound as an undulating stripe, led by the thoughts of an adventurous dot. Over the course of several minutes the characteristics of the stripe and the dot are developed and made audible as their movements describe different scenarios with sound.

Following the presentation of the video and audio works "A Story of Sound + Visuals (a small index of contemporary psych)" will unfold over the remaining hours of the evening. Taylor will play selections from his record collection of groups and individuals who seek to develop a language of psychedelia through the music they compose. Typically downtempo and contemplative, the collection presents a place where many of the ideas and observations employed within "Lichen Voices / Stripes and Dots and The Story of Stripes and Dots (Chapter 4)" were developed. The music will be accompanied by projected footage of two people dressed as a stripe and a dot cavorting on a moon-ish landscape. The footage presenting a visual choreography to the music that is played, lending a visual setting to the audible soundtrack of the night.