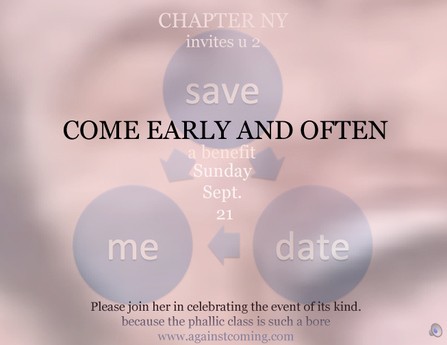 Cara Benedetto: buy to possess, love to own

Cara Benedetto is an instructor and artist. Benedetto’s work is about the process of becoming woman. The voice is multiple, emotional, vulnerable, considerate, and assertive. It is the voice of a self that is becoming part of the social, a sexuate being, a citizen and member of the world, unafraid of imposed structures and psychologies of fear, domination, and subordination. A voice that is as angry as it is willing, desirous of being represented in a complex way. A voice that resists the enslavement of women for free labor that the patriarch and capitalism both demand and rely upon.

Benedetto will present recent work that refers to her Against Coming project that dissolves the notion of ‘coming’ as used in a phallocentric economy or patriarchy. She has exhibited at ICA Philadelphia; Chapter NY; Taxter and Spengemann, NY; Night Gallery, LA; and Metro Pictures, NY. Her work has been reviewed in Gallerist NY, Art in America, The Art Book Review, and NYT Magazine. She is currently a Visiting Assistant Professor of Art at Carnegie Mellon School of Art.