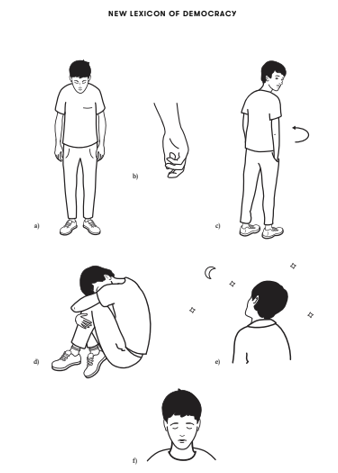 How can citizenship, nationalism and the state be reimagined to be more homely to neurodivergent people? Can shy, awkward and neurodiverse people be reimagined as dissenters, subversives and revolutionary leaders? How can conceptual art and performance reimagine identity and society to make life less alienating? Drawing from the worlds of teen movies, revolutionary constitutions and human rights law, the rhetorics of 1960s Liberation movements and anticolonial struggles, grunge and indie music and anti-psychiatry, Hamja explores these questions. Recent developments, such as the birth of the neurodivergent Labour movement, and attempts to recontextualise the project in Post-Tito Slovenia, will be further elaborated on.

Hamja Ahsan is an artist, writer, activist and curator based in London. He is the author of the book "Shy Radicals: Antisystemic Politics of the Militant Introvert," and founder and co-curator of the DIY Cultures festival of creative activism, zines and independent publishing since 2013. He was shortlisted for the Liberty human rights award for Free Talha Ahsan campaign on extradition and detention without trial under the War on Terror. His recent writing was anthologised in "No Colour Bar: Black Art in Action 1960–1990." He has presented art projects at PS1 MOMA (New York), Tate Modern, Gwangju Biennale, Shaanakht festival (Pakistan), Shilpa Academy (Bangladesh), Brown University’s Neurodiversity in Action conference and at the upcoming Ljubljana Biennial 2019.