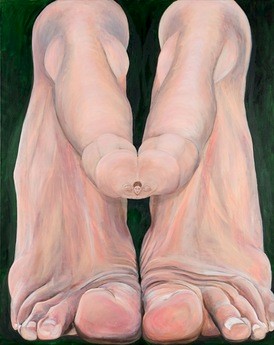 Jana Euler, Under this Perspective, 2015

Jana Euler, born 1982 in Friedberg, Germany, is an artist currently living and working in Frankfurt. She studied from 2002-2008 at Städelschule, 2006 at Glasgow School of Art and 2003-2006 at Goethe-University Frankfurt. Recent solo exhibitions include Where the Energy comes from, Bonner Kunstverein and Kunsthalle Zurich (2014), and In, Dépendance, Brussels (2014) as well as gallery shows at Galerie Neu, Berlin and Cabinet, London. Recent group exhibitions include Inhuman at Fridericianum Kassel (2015) and at the Whitney Museum of American Art, New York (2012). Jana Euler is currently on view in Painting 2.0  at Museum Brandhorst, Munich. Jana Euler will present her solo show In It at Portikus, to open on 27 November 2015 in Frankfurt, where she was last seen in Sexpressionismus at 1822 Forum (2007).

In her talk at Städelschule, Jana Euler will focus on recent works and exhibitions seen from the perspective of working on her show at Portikus, opening two days later.