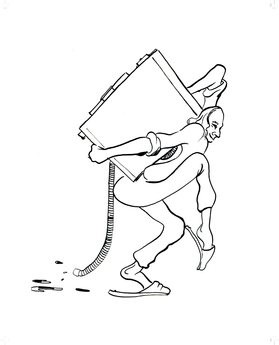 Edition for the Liverpool Biennial, 2014, ink on celluloid, courtesy the artist

Peter Wächtler works with sculpture, drawing and video. The most re-occurring element is the use of text, be it voice-over, subtitle, songtext or short story. His texts often share an distorted or exagerated tone and are mainly told by a multi-souled first person narrator (e.g. orphan, shoemaker, bad butler). These reports can remain text or eventually conclude into a video or a series of ceramic sculptures instead. Wächtler moves within a common system of imagery and connotations, describing a social grid of expectations, powers and limits, along with some of the blurred identities that haunt it.

In the lecture he will speak about his practice and will show excerpts of videos as well as images of his other works.