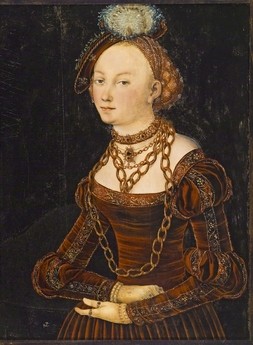 Portrait of a Woman, Lucas Cranach the Elder, about 1540, 76 x 56.5 cm, oil, tempera on panel, Collection of the Winnipeg Art Gallery

For the exhibition The Grand Balcony the awareness of an artistic consciousness that creates ‘images’ which are materially compulsory in the present though suffused with historic resonance and in parley with the ‘information economy’s heightened dematerialization’ is paramount. Praxis of such images challenges the reproducibility of the (digital) image, decentralized authorship, and the development of attention as currency. Moreover it reframes questions around the physical exhibition space, imitation, tableau, and séance.

The Grand Balcony draws loosely on Jean Genet's Le Balcon, where the play’s high porch is a space of contestation between revolution and counter-revolution, reality and illusion. A recurring motif in Genet's writing, his balcony is a place of perverse acts where representation itself can be perversely troubled. It is a desiring apparatus and a theatrical space that articulates the complex relationship between inside and outside, up and down. The balcony is also subjected to a particular regime of visibility, a space where a person can dramatically stage herself, with power and vulnerability on display.

As a brothel, Genet's Grand Balcony presents a fiercely ironical microcosm of the power elite besieged by revolutionary forces at the gates. In turn, the exhibition The Grand Balcony enacts Genet’s concern with meta-theatricality and role-playing by unfolding experiences alongside “objects” that often refuse to reveal themselves as truths. Along with Genet, The Grand Balcony enlists the infamous Marquis de Sade, who adds the right to pleasure to the canon of human rights. His advocacy of pleasure uncovers the paradoxes of the bourgeois principle of formal equality as it exposes the fact that fantasy categorically resists universalization. Fantasy is the absolutely individual way in which someone structures her/his “impossible” relation to things.

In the tradition of both Genet and de Sade, Le Grand Balcon aims to be an exhibition - simultaneously playful and fatalistic - where things can go astray.

Philippe Pirotte *1972 is a Belgian art historian, critic, curator of numerous international exhibitions and director of Städelschule and Portikus since 2014. From 2005 – 2011, he was the director of the Kunsthalle Bern. Since 2005, Pirotte has been Senior Advisor of the Rijksakademie for Visual Arts in Amsterdam. In 2012, he became Adjunct Senior Curator at the UC Berkeley Art Museum and Pacific Film Archive and in 1999 he co-founded objective exhibitions, a not-for-profit institution in Antwerp, Belgium.