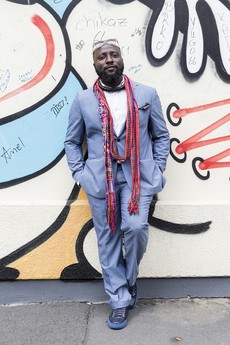 This lecture takes its cue from the 2007 eponymous album The Dog Done Gone Deaf by composer, musicologist, educator, sound artist and panafricanist Halim El-Dabh. El-Dabh’s electronic music, music for chamber, percussion ensembles, orchestra, concerto, wind ensemble, choral music, dramatic music and film music stand out as some of the most daring and innovative of the 20th century. This lecture will offer a possibility of a counter narration and a re-configuration of a genealogy of sound art history, albeit from within. The Dog Done Gone Deaf will be an effort to lay bear El-Dabh’s musical dexterity, the sophistication and complexity of his artistic oeuvre – which integrates allegories, myths and pluriversal cosmogonies – that spanned a period of seventy years.

It is true that since an excerpt of his 1944 composition The Expression of Zār was released under the title Wire Recorder Piece on CD in 2000, El-Dabh has been celebrated in art music circles as one of the first composers to use the techniques that Pierre Schaeffer was later to use in 1948, thereby giving birth to musique concrète. But it is also true that El-Dabh’s practice can and should not be reduced to references of the Western canon (although he played with/for Alan Hovhaness, Henry Cowell, John Cage or Martha Graham amongst others), as his musical philosophies lie deeply rooted in African, Afrodiasporic and Arabic musical traditions, and his compositions and experimentations surpass the framework of musique concrète.

The lecture will be an effort to put a spotlight on a forgotten forerunner of Sound art, an imperative figure in what one might call an Afrosonic art practice, and reflect on and disseminate El-Dabh’s aural epistemologies.

Bonaventure Ndikung will be a visiting guest professor this forthcoming semester at the Städelschule.

Dr. Bonaventure Soh Bejeng Ndikung was born in 1977 in Yaoundé, Cameroon, and is an independent art curator and biotechnologist. He has been living on and off in Berlin since 1997, where he studied Food Biotechnology in the University of Technology Berlin, did a doctorate in Medical Biotechnology in the Heinrich Heine University Düsseldorf/TU Berlin and a post-doctorate in Biophysics in Montpellier. He is the founder and artistic director of the non-profit art space SAVVY Contemporary Berlin – a laboratory for conceptual, intellectual, artistic production and exchange that takes up the challenge of investigating the ‘threshold’ between, as well as critically reflecting on and questioning discourses around the »West« and the »non-West« .